After watching the new Batman v Superman: Dawn of Justice Comic-Con trailer yesterday, I hopped over to BirthMoviesDeath to get their take on it, amused to see the following headline: “No Laughs Survived The BATMAN V SUPERMAN: DAWN OF JUSTICE Panel.”  I instantly disagreed because I definitely laughed when Jesse Eisenberg’s Lex Luthor closes the trailer with an unintentionally hilarious subdued reading of the line, “The red capes are coming! The red capes are coming!”  Then I read Evan Saathoff‘s piece and saw that he would probably agree with me, “I think I might be all alone on this, but this movie looks absolutely ridiculous. So much of it feels awesome, but the seriousness on display here crosses over into comic levels a number of times. This is especially true whenever Lex Luthor shows up, but also the couple times we see Superman and Bruce Wayne looking at things with their strongest ‘I want to kill you’ faces.”

That’s actually a fantastic trailer.  I don’t mean that it necessarily makes Batman v Superman look like a fantastic movie, but that trailer absolutely lets me know what kind of movie Batman v Superman is going to be.  As summarized by THR, “The world is torn between hero worship and outright suspicion of Superman (Henry Cavill, who spends the entire trailer silent, tellingly enough) in the wake of the events of Man of Steel — somewhat understandably, considering the carnage caused in that movie’s final battle — with Batman being manipulated by someone into deciding that Superman needs to be stopped […] It’s brash, unsubtle — the operatic music when the logo is revealed being a genuinely glorious zenith of melodrama — and it sets out the stakes of the movie perfectly; you know what this movie is going to be like after watching, and it’s something that’s both more realistic and more of a heightened reality than what Marvel offers in its movies.”

The question becomes whether or not the version of Batman v Superman communicated in this trailer is something you want to see.  I am reminded of a conversation I had with a best friend as we left a screening of Kingsman: The Secret Service earlier this year. Throughout the film, she sunk deeper and deeper into her seat and her sighs of annoyance grew louder and louder, clearly indicating she was hating nearly every single minute of what she was seeing, sophomoric anal sex jokes and all.  Afterward, she conceded that perhaps Kingsman‘s true sin was simply that it was not the right movie for her, going something like, “That movie was clearly not made with someone like me in mind.”  I can’t say that about myself with Batman v Superman because I fall right into the target audience nor do I mean to suggest that I hated every minute of the trailer.  I want this movie to be amazing, and that trailer indicates there will be plenty of entertainment value, even if some of it might be unintentional.  However, I suspect that like my friend with Kingsman I will walk out of Batman v Superman thinking it wasn’t the right movie for me.  I usually prefer jokes and story, and this is going to have plenty of grim faces and spectacle.  It’s just a different philosophical approach, and it’s not really connecting with me right now.

Here are a couple of stray reactions:

As a reminder, it’s been estimated that Metropolis suffered $700 billion worth of physical damage during Superman’s game of rock-em, sock-em Kryptonians with Zod in Man of Steel.  To put that in context, 9/11 only caused $55 billion worth of physical damage.  That fight in Metropolis resulted in 129,000 known fatalities, nearly a million injuries, and over 250,000 missing and assumed dead, according to Watson Technical Consulting and Buzzfeed. That is an impact comparable to the Nagasaki nuclear bomb.

It is kind of bizarre that we have those statistics.  Man of Steel is just a movie.  Metropolis isn’t real.  However, that’s an indication of just how much Man of Steel‘s critics fixated on the third-act catastrophe climax.  There is a general idea that too many blockbuster movies trade in destruction porn, yet it’s one thing to see destruction caused by evil robots (Age of Ultron, Transformers) or catastrophic earthquakes (San Andreas) and another thing to see Superman recklessly endangering so many innocent lives.  His actions are framed as a heroic response to the actions of a madman, but it’s just so jarring to fans who might remember how Superman II went out of its way to show Superman surrendering to the Terrence Malick Zod as a ruse to lead him away from the innocent citizens of Metropolis.

Talking to The Japanese Times back when Man of Steel was still in theaters, Snyder explained the destruction:

“I wanted the movie to have a mythological feeling. In ancient mythology, mass deaths are used to symbolize disasters. In other countries like Greece and Japan, myths were recounted through the generations, partly to answer unanswerable questions about death and violence. In America, we don’t have that legacy of ancient mythology. Superman (who first appeared in ‘Action Comics’ in 1938) is probably the closest we get. It’s a way of recounting the myth.”

Asked about the controversy now, Snyder told EW, “I was surprised because that’s the thesis of Superman to for me, that you can’t have superheroes knock around and have there be no consequences.”  He has maintained pretty much since day one that the idea was to visit the consequences in a sequel, and this new trailer’s man-on-the-ground point of view flashback to the Superman-Zod battle looks like it will be remarkably effective.  In fact, I wonder if that might in fact be the opening scene of the movie, quickly personalizing the destruction by revealing how it effected Ben Affleck’s Bruce Wayne, who is positioned as a heroic, 9/11-esque first responder rushing into an approaching debris cloud.  As someone who still vividly remembers watching all of the news coverage on 9/11, though, that imagery of Affleck doesn’t completely sit right with me.  So many movies have evoked 9/11, but something about that specific image seems in especially poor taste.  Too soon?

2) That’s Not How I Pictured The Batcave

I don’t know that I’ve ever seen the batcave look like that before.  I kind of like it.

3) Who’s Leaving the Notes for Batman?

We see that Batman is being manipulated against Superman, but who’s leaving the notes?  Lex Luthor?  The Joker?  Ma Kent?  Wait.  Probably not that last one.

I am assuming this version of Alfred will be a bit more action hero-y, ala Sean Pertwee in Gotham.  That’s usually a divisive direction to take Alfred, but Irons definitely nails Alfred’s more traditional mode: dishing out sage advice.

5) I Had Kind of Forgotten That Amy Adams, Laurence Fishburne and Diane Lane Are Also In This

I knew that the supporting players from Man of Steel were all coming back, but because there’s been so much focus on all of the Justice League characters I had completely forgotten about Amy Adams as Lois Lane, Fishburne as Perry White and Diane Lane as Ma Kent.  So, the first time Amy Adams popped up in the trailer I did a quick double take, kind of like, “Oh, you’re still around?”  It reminds me of how I walked out of Man of Steel assuming we were set up for a more traditional Superman sequel, and now I’m mildly surprised Batman v Superman has any time for Lois Lane, Perry White and Ma Kent.  There is a slight charge from hearing Perry White chastise Clark Kent for taking on Batman in the newspaper, though.  Jackie Cooper’s Perry White never got to say anything like that because Batman didn’t exist in that universe.

Pa Kent would literally rather die in a tornado than see his son use his powers in Man of Steel, and now Ma Kent (I know her name is Martha, but I always think of her as Ma Kent) is stepping up to give Clark confusing advice, acting as his moral compass before adding in a quick, “You don’t owe this world a thing.”  With great power must also come your freedom to do whatever the hell you want.

Well, at least Jesse Eisenberg’s Lex isn’t wearing hoodies, as until this point I had been picturing him as his version of Mark Zuckerberg in The Social Network.  He’s got the long hair, speaks in hushed tones, gets Superman to kneel in front of him at one point, and just…I dunno.  To some, Eisenberg steals this trailer, but to me I see a performance which could be next year’s version of Eddie Redmayne in Jupiter Ascending, aka, widely mocked for being comically bad.

That’s Tao Okamoto as Mercy Graves, Lex Luthor’s assistant and bodyguard who was originally created for Superman: The Animated Series  She’s like a lesser Harley Quinn in that she was created for an animated series and has since entered the larger canon, but she’s never broken through as a significant character the way Quinn has.  I always liked her on Superman: TAS, where she was memorably voiced by Lisa Edelstein, and it is fun to see her here, even if she doesn’t look anything like she did inTAS.

Is that Jason Momoa’s Aquaman?  Or at least somehow connected to him?

10) Why Do We Need to See Batman’s Parents Killed Again?

Ugh.  Didn’t we just see Bruce Wayne’s parents killed again in the first episode of Gotham?  Why must we revisit it again in Batman v Superman?  One of the more appealing parts of this new version of Batman is that he comes sans origin story, meeting him on the tail end of his crime fighting career.  That means no flashbacks to watching his parents die, or at least that’s what we thought.  I guess they decided it was too important to the identity of Batman to simply assume we already know about his dead parents trauma.  To be fair, the very first scene of the ’89 Batman is meant to fool us into thinking we are watching Bruce Wayne’s parents murdered when in fact it’s just a random mugging of random rich people we never see again.  This could be the same kind of thing, but it doesn’t feel that way in the trailer.

We’re still not seeing much of Wonder Woman, but she looks fairly cool in the trailer, although something about her brief action moments makes me think of 300.  This movie is called Batman v Superman, and this is actually the first full-length trailer.  I wasn’t expecting to see a ton of Wonder Woman at this point.  I am assuming she will be featured more in the ads the closer we get to the March 2016 release.

12) The Rumors Were True

There have been oh so many rumors about Batman v Superman, among them the idea that in this universe Robin will have been killed by the Joker years ago and Lex Luthor will be using Zod’s corpse to better understand Krytponian biology.  Both of those rumors appear to have been confirmed in this trailer.

Lastly, DenOfGeek thinks the following image in the trailer…. 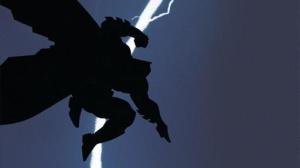