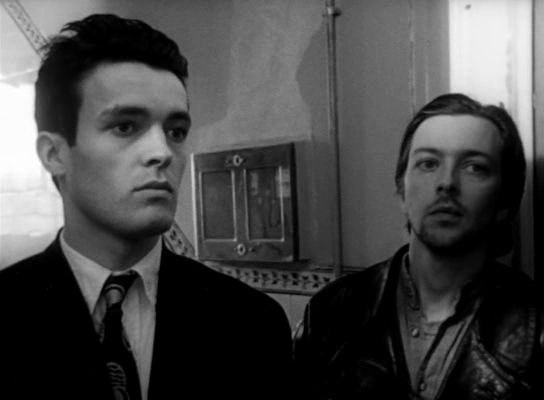 In honor of the release of the new Superman movie, we’ve decided to examine all eight of Christopher Nolan’s films, from Following to The Dark Knight Rises. Each day, We Minored in Film’s own Julianne Ramsey will discuss and examine one of Nolan’s movies, leading up to the June 14th release of Man of Steel.  Granted, Christopher Nolan only produced Man of Steel whereas Zack Snyder directed it (although Nolan was on set from time to time).  However, Nolan’s influence on the film is still where the movie’s publicity emphasis has been placed.  So, that’s where we went with it. Plus, recapping Snyder’s filmography would mean watching Suckerpunch, and that’s not happening anytime soon.

We begin with Christopher Nolan’s first film, Following. Shot for around $12,000 (to give you some perspective, Kevin Smith’s debut, Clerks, cost more than twice that amount) over the course of a year (basically whenever the cast and Nolan could get together and shoot some scenes), it mainly gained attention in the film festival circuit. It earned mostly favorable reviews, and brought Nolan early notice as a director to watch.

Looking at Following fifteen years post its release date, two things become clear: Nolan was clearly already a director and writer of some talent, but this movie functions more like the work of someone with a lot of potential, rather than a talent fully formed. The film’s plot is fairly simple, an unnamed protagonist begins following people, under the guise of gathering writing inspiration. However, he soon comes to realize he has an unhealthy obsession with voyeuristically prying into stranger’s lives.

Check out this opening scene. He can explain it better than I can:

He continues to follow random strangers until he’s confronted by one of his targets, a thief named Cobb. After his encounter with Cobb, our central character ditches his stalking tendencies, and falls under the spell of Cobb’s allure. Cobb lures him into a world of crime and deception, leading to a series of double and triple crosses that damage both our protagonist and other characters captured in Cobb’s web.

The primary issue with Following is the fact that it cannot entirely escape its student film origins. The black-and-white cinematography lends the film an eerie, sinister feel, with shadows forever drifting over characters’ faces like dark, insidious fingers, but the film’s low budget remains constantly apparent. Both its plot and characters exist as fairly standard film noir faire: A man is drawn into a world he thinks he can control, but instead finds himself manipulated for the onset by both Cobb and a mysterious femme fatale who is more than she seems (Aren’t they all?).

The film’s non-linear structure plays more like an attempt to conceal the fact that the plot is not particularly complicated, rather than a cinematic enhancement. Sometimes the main character will have long, greasy hair. In the next scene, he’ll be clean-shaven. Certain scenes feature him with severe facial bruising and lacerations, but the next scene he’ll be completely unharmed. It’s disorienting, but there isn’t a real reason behind the fractured structure. After all, the film’s framing device has him recounting the events to a police officer. Why would it be this disjointed and outs of sequence if he’s narrating the events? If this is the best he can do with a plot, he’ll never make much of a writer.

You’ll notice I’m barely talking about this film, because there isn’t that much to say. It’s a simple, effective, low budget, film noir. However, once you strip away the narrative twists and loopy structure, there isn’t much going on beneath the surface. As it is, it’s my least favorite Christopher Nolan film.

However, that does not mean the film is not worth watching. The film’s final twist, in which the viewer learns how completely screwed the main character truly is, remains devilishly effective. It’s clever and well-done, and only then do you see how carefully Nolan has constructed his plot. However, the film’s jumbled structure still feels more frustrating than pleasantly disoriented. It’s worth checking out, but mainly just so you can see Nolan’s potential was present even in his first film and how much he would grow as a filmmaker.

Following is available to stream through Amazon and Netflix, and was just released on Blu-ray and DVD through Criterion.

Are you a fan of Nolan and/ or Following? Am I too hard on the film? Was I not hard enough? Let us know in the comments!

Next Up in The Great Christopher Nolan Film Re-Watch is Memento, which does a lot of the same things as Following just a lot better.