Be honest: Have you lost track of how many comic books are being turned into TV shows right now?  The last time I counted there were three already on the air and past their first season (Walking Dead, Arrow, Agents of SHIELD), four which have debuted during the current TV season (Gotham, Flash, Constantine, Agent Carter), two which are about to debut (iZombie, Daredevil), and at least 18 others at some stage of development, the biggies being CBS’s Supergirl, TNT’s version of Teen Titans, and Sony’s version of Brian Michael Bendis’ Powers.  We now have our Supergirl – it’s Glee’s Michelle Benoist – just as we now know which of the Titans will end up on TNT – Nightwing, Barbara Gordon, Raven, Starfire, and…Hawk & Dove for some reason.There are now some fairly nerdastic-looking trailers out there for Powers and Daredevil.

There used to be a time, though, when TV was not dominated by the trials and tribulations of costumed vigilantes but instead by the high drama of doctors, lawyers, and cops.  Even throughout the ‘90s as films got bigger and bigger with ballooning budgets and eye-popping special effects the leading dramas on the TV side of things were stalwart procedurals like Law & Order, NYPD Blue, and ER.  Comic book television was mostly relegated to that one season of The Flash (1990), four little-seen syndicated seasons of Superboy (1988-1992), and the rather romance-oriented Lois & Clark (1993-1997).  Now, TV is still ruled over by cop procedurals like CSI and NCIS, but it’s also ruled over by The Walking Dead.  As a result, TV is starting to mirror the same thing happening with film, namely that comic book-derived content is the trend of the moment.  Even if there are still technically plenty of other non-comic book films being made the outsized attention and intense media build-up to each comic book film’s release makes it seem as if Hollywood has gone comic book crazy.  Why has that craze transferred to TV?

The Hollywood Reporter asked that same question to some of the people making these shows, and here’s what they said

1. Advancements in technology have finally made comic book storytelling on a TV budget feasible

“It’s a perfect confluence of zeitgeist and the actual ability to do it and do it well,” says Arrow executive producer Marc Guggenheim.  “A big part of it is the technology is finally here that allows these characters to be realized in TV and film.”

2. Audiences want familiar characters and storylines, and thanks to the Marvel Cinematic Universe they’re familiar with the comic book universe now

According to Agents of SHIELD executive producer Peter Roth, “People like hearing the same story in new ways.”

3. Brand recognition helps them stand out 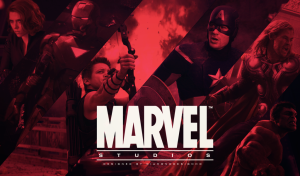 According to Agent Carter co-show-runner Michele Fazekas, “Networks are buying formats from Australia. If you feel like it works, if there’s a proof of concept in an existing show or a comic book, that’s very attractive because it feels like people are taking less risk.”

4. A lot of the people making the shows are genuine comic book nerds

According to The Strain’s Carlton Cuse, who adapted Oni Press’ The Sixth Gun as a pilot for NBC, “For a lot of people, including myself, who are comic book fans, that’s what we read.”  His Strain co-creator Guillermo del Toro added, “Every generation brings with them the media in which they were raised as part of the narrative leap in what is acceptable or not in mainstream entertainment.” 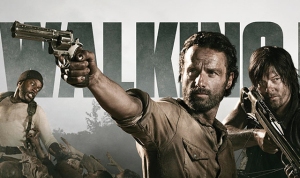 The Walking Dead started out as AMC’s quiet little zombie show experiment, coming to us from the guy who made Shawshank Redemption and premiering for a truncated first season starting on Halloween 2010.  Fast forward to today, and we’ve lost track of the number of show-runners they’ve gone through, but it matters not because the show is the top drama in the 18-49 demographic, raking in 10 million more total viewers than Agents of SHIELD in Nielsen live plus 7 and nearly 15 more than Arrow.  It is the unquestioned leader of the comic book pack.  The rest of the comic book shows aren’t just following the lead of what’s happening on the film side of things.  They’re all desperately chasing after Walking Dead’s ratings, not competing directly, of course, but hoping to similarly leverage a built-in fanbase from the comics into ratings glory.  That’s easier said than done considering that among this season’s new comic book shows all indications are that Constantine won’t be coming back.

The concern is the same as it is with the comic book films: Won’t we all eventually get sick of these things?  Of course, that seems to be more of a going concern for studio suits who have to worry about maintaining an appeal to a general audience.  The hardcore comic book nerds among us have never been so indulged by pop culture, and while it’s cool and call that Supergirl is getting her own show you can’t help but pine to see your actual favorite comic come to screen.  I’d personally love to see a Suicide Squad spin-off of Arrow, even though the feature film has probably killed that.  More than anything else, though, I dream of someday seeing Marvel’s The Runaways turned into a TV show.  They’re a group of kids who find out their parents are all actually supervillains so they run away together, discovering their own super powers along the way.  Others have made compelling arguments for the viability of shows based on Adam Warlock, Kamala Khan (i.e., the Muslim Ms. Marvel), Aquaman, and Cable.

The key to guarding against oversaturation is diversity, just as it is with the films.  For example, the CW having Arrow, Flash AND iZombie, all three DC Comics properties, is not overkill because iZombie is a completely different beast.  However, if the CW added another live-action Arrow or Flash spin-off it would start to feel the DC Comic Book channel.

What about you?  Are you suffering from a little comic book show fatigue?  Or are you in nerd heaven right now, and you’d totally love to see a Runaways or Ms. Marvel show?  Let me know in the comments.1